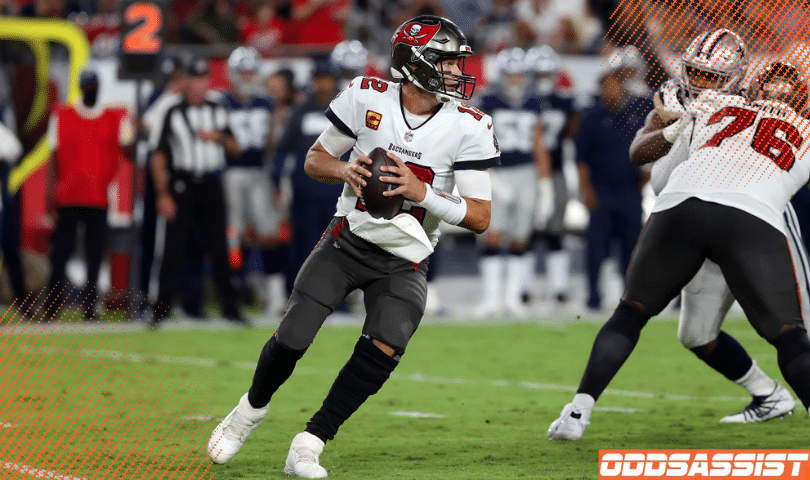 The Tampa Bay Buccaneers travel to Dallas to take on the Cowboys in a rematch of an opening weekend game from the 2021 season. Tampa came out on top at home in that game by a score of 31-29.

While both teams have a lot of the same key pieces in place heading into the 2022 season, both have also suffered some key losses due to injury and free agency.

The most glaring area for concern is with Tampa Bay and their offensive line. The injuries have really taken a toll on that position heading into the start of the season.

Guard Aaron Stinnie is out for the year with a torn ACL, center Ryan Jensen is out for the foreseeable future with his own knee injury, Pro Bowl guard Ali Marpet retired after last season, and Tristan Wirfs is recovering from an oblique injury suffered a few weeks ago but is expected to play Sunday.

However, for the most part, it will be new faces and inexperienced rookies that will be called on to protect the slow-footed Tom Brady. And without a lot of depth on the line, one injury during the game will cause major problems for the Bucs.

Brady had an eventful offseason of his own. He announced his retirement only to reverse course and decide to return for another season. Then during training camp, he was mysteriously away from the team for a few weeks dealing with personal matters. So Brady did not have his normal practice time to develop strong chemistry with the offense.

Cowboys quarterback Dak Prescott lost his biggest weapon when Amari Cooper left for the Cleveland Browns. Cowboys current number two receiver Michael Gallup is out as he continues to recover from a torn ACL.

Dallas coach Mike McCarthy has made mention of getting running back Tony Pollard more involved both with both carries and looks by lining him at wide receiver. In addition, the Cowboys have a strong back in Ezekiel Elliot.

The Cowboys defensive line should be able to get to Brady, forcing him to make quick throws and Tampa may have trouble getting the running game going behind a makeshift offensive line.

Given the offensive issues for both teams, points will be at a premium on Sunday night.

THE PICK: UNDER 50.5 points. With the total sitting at 50.5 play the Under. Both offenses have a lot of injuries and question marks which should lead to a lot of opening night struggles to score. Compare odds here

With a lack of offensive line protection given all the injuries, Tampa has Brady will be under pressure all night. Expect him to take a few sacks throughout the game and throw the ball away a lot.

In addition, at some point, he will likely find a few positive yards on the ground as he is scrambling away from pressure.

With the Cowboys having some injury and depth issues at the receiver position this could be a chance to work Tony Pollard into the passing game more, which has been a focus for the Cowboys this offseason.

In addition to a larger presence in the passing game, he will continue to see a decent amount of touches behind Ezekiel Elliot.

Given the number of opportunities, Pollard should have to touch the ball during the game, going over 51.5 total combined yards is not a big ask.

What is an Alternate Spread? Best Strategies for Betting