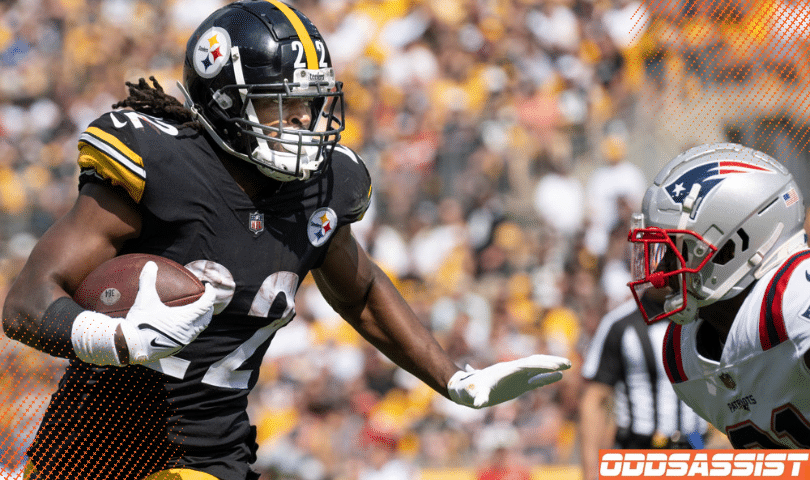 The 1-1 Steelers head to Cleveland this Thursday night to face one of their divisional rivals, the Cleveland Browns. After stealing a road win in Week 1 against the Cincinnati Bengals 23-20, the Steelers fell at home 17-14 to the New England Patriots.

Here’s a look at our spread, total, and prop picks for this Week 3 Thursday Night Football game.

The Browns are also 1-1 and are coming off a home loss to a rather inferior opponent. The Browns held off their former teammate, Baker Mayfield, in Week 1 by the score 26-24. However, last week was a big let down against a shotty Jets team.

While two games are a small sample size, we still have a better idea of who these teams are now compared to preseason. The Browns have been more offensive so far, averaging 28 points per game, good enough for 7th in the league.

The Steelers, on the other hand, have been the opposite. While they have averaged just 18.5 points per game, they have also allowed the exact same number to opponents. The latter being good enough for 12th in the league.

Look for the Browns to cover the 4.5 points on Thursday night at home.

The Steelers are keeping things low in terms of totals through the first two games of the season. In the 23-20 win over the Bengals, they kept it a tick below the 44.5 total. Last week, they held the Patriots to just 17 while only contributing 14 themselves, keeping the total almost 10 points below the number.

The Browns have been working the opposite side of the total in their games. They combined with Carolina for 50 points, which was 8 more than the 42 total that was set. Last week, they demolished the 38.5 total, combining for 61 with the Jets.

Something will have to give in this game and the public seems to be favoring the Steelers in the spread. So, it is no surprise that they are also on the Under here.

We are going to do something a bit unconventional and fade the public on the spread but tail them on the total. We have little wiggle room with this play but believe it is the right side of both.

The pick: UNDER 38.5 (FanDuel Sportsbook)

Here’s a look at our favorite player prop picks for this Week 3 TNF matchup:

Brissett has been solid to start the season for the Browns. In Week 1, he completed 18 of 34 passes as the Browns fought to come back late in the game. Last week, he was even better, going 22 of 24 on passes against the Jets.

The one thing the Browns realized at the end of the game, was that they needed to run more clock and they won’t make that mistake again here. In a game that should be a knock down drag out fight, Brissett’s attempts should be at a minimum here.

This may be our favorite prop of the evening. Hunt has gone for 58 and 46 yards in the first two games of the season. There is no reason to expect his number to go down this week.

Chubb will be used as the work horse and soften up the Steelers defense for Hunt to come in as a change of pace and pop off a couple long ones for us to cash this over.

We are taking a flyer here on this prop. However, don’t write this play off just yet.
In the redzone, the Browns have targeted just four players and three of those players have been targeted twice. Bryant is one of those three but has yet to make the grab and cash in on the chance.

We believe he will get an opportunity or two this week as the Steelers will be trying to force passes in the redzone.

Bill Christy brings an analytic and data-driven approach to his handicapping while also taking into consideration the public’s opinions. He has a strong background in College Football, College Basketball, and the NFL, but has been successful in all sports he has handicapped. Bill is always looking for an edge to deliver value to his readers.

What an Underdog is in Sports Betting?