FanDuel signed an exclusive content deal with Pat McAfee Inc. (PMI) in September 2019, which was renewed into a multi-year partnership in December 2021.

According to the deal, the former Colts punter and podcast host will support FanDuel during its new launches. At the same time, the operator will invest in PMI’s content development by sponsoring the production of new shows and events.

What’s more, FanDuel often features special Pat McAfee odds boosts and other exciting promotions. If you wish to take part in one of these FanDuel deals, you can join here—no Pat McAfee promo code or other promo code required.

There are plenty of Pat McAfee-sponsored promotions you can take advantage of on FanDuel. Here are some that were available in the past.

Pat’s Boosts is the most common Pat McAfee promo you’ll run into on FanDuel. These are mostly available during the NFL season.

One of the first Pat’s Boosts was released just days into the partnership. The so-called PMI’s “We Love the Chubb” Super Boost had the odds for Nick Chubb boosted from -110 to +140  any time he scored a touchdown. 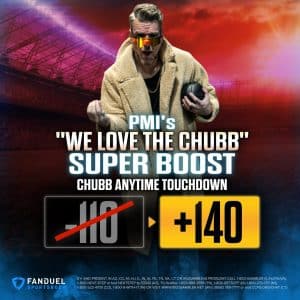 Pat’s Boosts have also been available on exciting props and combo bets, like the one that had the Packers winning, Davante Adams having 80+ receiving yards and Deebo Samuel having 80+ (rushing + receiving) yards. This PMI’s “Let’s Goooo” Super Boost had the odds bumped from +210 to +300. 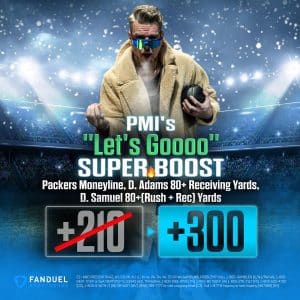 Although you can find Pat’s Boosts once a week during the NFL season, there are also plenty of other sports where these promos apply. For example, PMI’s “Never Walk Alone” Super Boost boosted Liverpool’s odds of winning the Champions League final against Real Madrid from -175 to +100. The Reds failed to lift the trophy in the end, but it was still a valuable deal at the time. 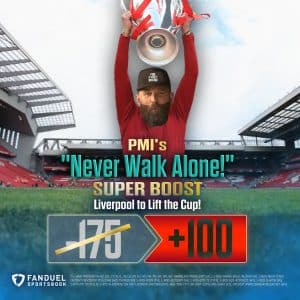 To never miss an exciting Pat’s Boost promo, you should follow both FanDuel Sportsbook and Pat McAfee on Twitter. You can also be in touch with all FanDuel’s promotions by creating an account and checking out the operator’s promo page.

With plenty of Pat McAfee promos during the regular NFL season and playoffs, we could only expect something special for the Super Bowl, and we weren’t disappointed.

Instead of a boost, this promo was a risk-free bet.

Since FanDuel and Pat have signed a multi-year deal, you can expect many more Pat McAfee Super Bowl promos in the future.

Spread the Love is an ongoing FanDuel promo that is now commonly sponsored by the Pat McAfee Show.

With this promotion, the line on a given spread will move in the direction the most people bet on. For instance, the Spread the Love promo on the college basketball game between Indiana and Michigan State had the line move one point in Indiana’s favor for every 250 people that bet on Indiana. There was no limit as to how much this line was allowed to move.

To sign up for FanDuel, you’ll have to fill out some basic information including:

After filling out this information, you may be asked to upload a government-issued ID (such as a driver’s license or passport) to verify your identity.

The whole process is quick and easy and should only take a few minutes. You can get an idea of what the registration screen looks like in the following mobile app screenshots (click to expand):

FanDuel became the exclusive sports betting and daily fantasy sports partner of Pat McAfee in September 2019. After a couple of successful years of collaboration, the two sides signed a multi-year extension in December 2021.

FanDuel remained one of the sponsors of PMI and the Pat McAfee Show, with McAfee announcing special deals such as odds boosts and other promotions through his podcasts and Twitter account. The sportsbook invested in PMI’s production, helping create a brand new live studio called the FanDuel Igloo.

FanDuel and McAfee will attempt to create new engaging shows and segments featured on PMI, including special-edition content, like the FanDuel NFL Draft Spectacular. McAfee and his crew are also obligated to promote FanDuel’s future launches in various states.

Upon signing the deal, Mike Raffensperger, the Chief Marketing Officer of the FanDuel Group, said:

“Simply put, Pat McAfee is the sports media industry’s fastest-growing star, and we’re thrilled to deepen our relationship with him as our exclusive partner. Pat and his team champion the FanDuel brand, and together, we’ve developed groundbreaking content experiences for his audience and our customers alike”.

Pat McAfee is a former NFL star who used to play as a punter for the Indianapolis Colts between 2009 and 2016. He had two Pro Bowl appearances and was voted first-team All-Pro in 2014. Throughout eight seasons, McAfee recorded 575 punts for a total of 26,669 punting yards.

After retiring early (at the age of 29), Pat began hosting the Pat McAfee Show as part of Barstool Sports. Following his departure in 2018, McAfee created Pat McAfee Inc., which runs four podcasts, operates a charity (the Pat McAfee Foundation), and sells merchandise.

Parallel to this, McAfee is involved in professional wrestling (WWE), both as a performer and a color commentator. He also seldom broadcasts college football and NFL games.

How to Read Betting Odds 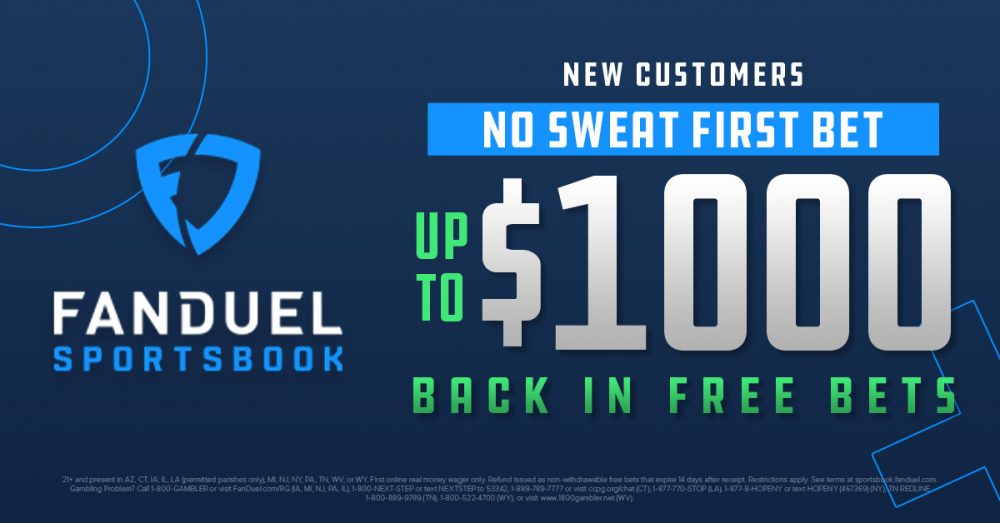